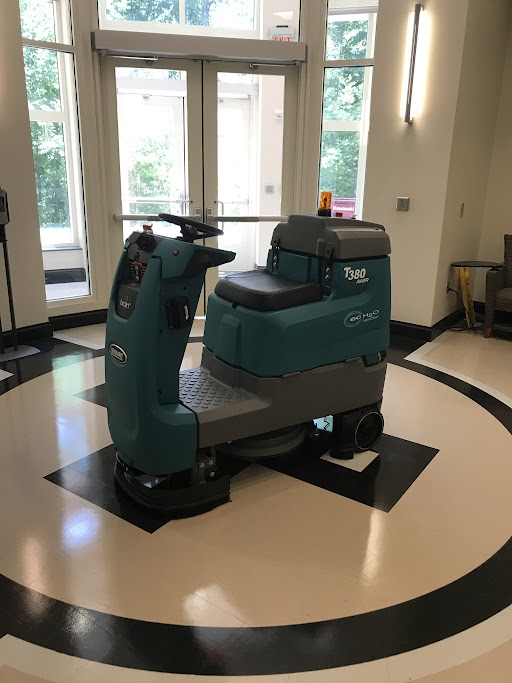 In continued efforts to boost effectiveness and efficiency, the BES team has acquired the department’s first Autonomous Scrubber Tennant (T380).

According to Tasheem Hayes, interim senior assistant director of BES&R, “UNC Charlotte recently became the first university in the state to own and operate a T380 AMR robotic scrubber.”

The equipment, which increases productivity, can be used manually or autonomously and is designed to work safely alongside employees as they focus on other tasks. Its NanoClean technology converts water into an innovative cleaning solution known as nanobubbles.

The T380 is powered by BrainOS, an advanced artificial intelligence and robotic technology platform. It can run for four to six hours on a single charge and clean 33,440 square feet per hour. With a 20-inch scrub head, the scrubber cleans narrow aisles and maneuvers around obstacles with reduced human assistance.

Hayes confirms, “We are currently using the scrubber in the EPIC Building with plans to expand to multiple locations on campus.” Joe Scollo, floor crew manager, and Jerry Womack, BES supervisor in the EPIC building, are working collaboratively to ensure the success of this pilot project.

Greg Jones, BES&R equipment repair and supply chain technician, trained the machine and developed the cleaning routes using the BrainOS Teach and Repeat technology. The newly developed routes in EPIC took four hours to complete and will save labor costs.